Lord Youth plays music that you can’t really pin to one category. From fast-paced jivey songs, to downbeat ballads, Lord Youth offers a fresh sound that doesn’t sound like anything you’ve heard of. His soul-filled rock and roll is paired with a gloomy deep voice comparable to the likes of King Krule, while still preserving his own unique sound. Lord Youth plays music that tells a story and draws emotion – it somehow transports you to the midnight countryside, floating down a river in a sailboat.

Micah, the man behind Lord Youth, took some time to talk with me about his obscure musical inspirations, where the name Lord Youth came from, and his upcoming full-length album. 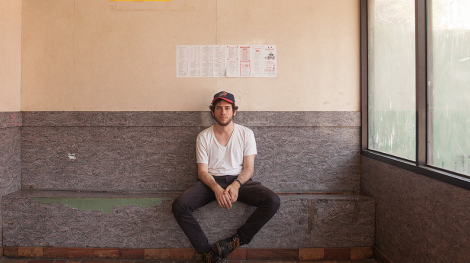 How did Lord Youth start?

Lord Youth started in my old apartment in Neükolln, Berlin. I had a Tascam 8 track cassette recorder and it was raining all the time, so I mostly stayed at home and recorded. When I wanted to add an instrument that I didn’t have at home, I would call up a friend in the hood and borrow it.

Wow! That sounds pretty cool. Where are you from originally?

I grew up in NYC.

It looks like your living in the NY countryside now, is that right?

Mostly I live in NYC actually but I spend a fair amount of time in the countryside, where I have a studio.

That has to be pretty nice – What’s that like compared to the other places you’ve lived?

I am a city boy but I feel much more relaxed in the country. Fresh air.

Where did the name Lord Youth come from?

I was obsessed with early calypso music. Especially that song about King Edward’s Abdication. I wanted a name like Lord Invader. So I thought Lord Invaded. But it sounded like a video game. Somehow that became Lord Youth.

Very interesting, I’ve never really listened to that type of music – How did you get into calypso?

I don’t know how I got into calypso. It was probably on a compilation of digitized 78s that someone gave me.

Is Lord Youth a solo project or do you have any other collaborators/members?

Lord Youth is basically just me. But I collaborate with a lot of people. The new record was produced by Anders Christophersen, for example, who greatly influenced the sound.

How would you describe your music to someone who’s never heard of it before?

Who/What are you listening to most these days? Like what’s an album/artist that you’ve been playing nonstop recently?

I have been listening a lot to Floating Action and Harvest by Neil Young.

Have you played any live shows with Lord Youth and do you have any upcoming shows/events?

I do play Lord Youth shows. Sometimes solo, more low key, with a guitar and amp with effects. And sometimes with a full band. They are wildly different shows.

Oh I bet. I know you just put out a single a couple of months ago but are you looking to release anything else later this year?

I am releasing my first full length record this fall.

Do you have a favorite song you’ve written and is there a story behind it?

I can’t choose between them. Like children. I love them all equally. “Blue Yodel 156” was inspired by my friend Bots, who lives on a boat and sails around the Mediterranean. That may be the one that I most enjoy singing.

Stay up to date with lord Youth through the following social links:

One response to “Q&A: Lord Youth”